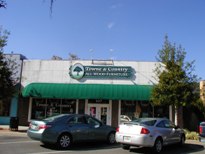 Dampier Building
This building at 107 Courthouse Square was built by Francis Marion Dampier, Sr. as Dampier Department Store. The family operated the successful department store from 1945 to 1967. It is remembered that "Frank" Dampier spent many hours sitting on a wooden bench under an oak tree outside the store, visiting with acquaintances. Western Union operated from this store for a period of time.

The Dampier family members were prominent business leaders in the city of Inverness, which was then called Tompkinsville. Francis Dampier, Sr., a pioneer of Inverness, ran a general store. He was related by marriage to the Tompkinsville namesake, Alf Tompkins. Francis Dampier's brother, Earl, ran a grocery store before the Depression. Earl G. Dampier was the co-owner of the Evergreen Hotel located on Main Street across from the Bank of Inverness. F.M. Dampier was the Postmaster, had a sawmill and was a partner in a general merchandise store. 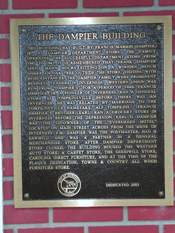 After the Dampier Department Store closed, the building housed the Western Auto Store, a carpet store, the Goodwill Store, and Carolina Direct Furniture. In October 2003, at the time of the historic plaque dedication, the current business was the Towne & Country All Wood Furniture Store.
Report a Concern
Stay Notified
Online Bill Pay
Calendar
[]