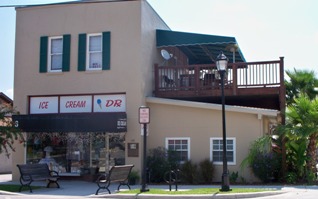 The Inverness Post Office was located here from 1915-1937, with Mary "Mollie" Pridgen as the Postmaster until 1936, followed by the appointment of Joseph P. Savary. In 1939, Richburg Grocery Store took over the 1st floor, with owners George Marion & Edna Richburg using the 2nd floor as their residence. From 1942-1945, the Conrad-Morris Funeral Home was housed here. The owner, Coy Conrad, served as Mayor of Inverness from 1941-1943. From 1946 - 1954, O. Frank Scofield and Charles S. Reed owned the building, until Carl Ogden & Carey Smoak purchased it to sell concrete products for building construction. Carey Smoak & Jack White operated their general building contracting business, "Smoak & White at this location from 1968-1997. 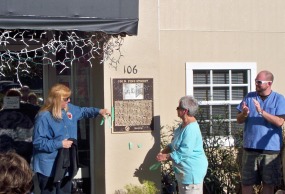 In 1997, Tim & John Channel, brothers born and raised in Inverness purchased the building and opened "Accents by Grace". The business operated from this location until 2006, when it moved to a Main Street storefront just around the corner.

In January, 2007 the "Ice Cream Doctor" store opened. At the time of plaque dedication the building celebrated a 100th birthday & the ice cream store celebrated a five year anniversary at this location.